“His exhibition of moral courage has never been surpassed in the annals of the Army.”

CLEARWATER, Fla., Jan. 20, 2022 /PRNewswire/ — On February 12, 2022, Blackwell Auctions will offer a historically important collection of items related to the late 19th century yellow fever epidemic, including the Congressional Gold Medal awarded to John Kissinger, the first to volunteer to be infected with yellow fever by famed Army physician Walter Reed. Additional items include the Cuban government’s Carlos Finlay medal that was awarded to Kissinger, a document handwritten and signed by Walter Reed, Kissinger’s hospital orderly armband, and a number of other documents pertaining to Kissinger’s service.

The Congressional Gold Medal is the highest civilian honor bestowed by the government, equal to the Congressional Medal of Honor and the Presidential Medal of Freedom, but far less frequently awarded. The medal, awarded by an act of Congress, has been given out only 173 times, versus 647 Presidential Medals of Freedom. (More than 3,500 Medals of Honor have been awarded.) Each Congressional Gold Medal is created by the U.S Mint, and its design is unique to the honor bestowed on the recipient. The first one was awarded by the Second Continental Congress to George Washington. The list of other recipients is a veritable who’s who of American history.

The Walter Reed medal for the “Conquest of Yellow Fever” was struck in pure gold, and each example bears the name of one of the medal’s 23 recipients. Kissinger was the first of these to step up and volunteer to be infected in order for his commanding officer, Dr. Reed, to test and confirm his working theory of how the deadly disease was spread. Reed later wrote that in his opinion, Kissinger’s “exhibition of moral courage has never been surpassed in the annals of the Army of the United States.”

“Especially today, it’s easy to overlook the fact that pandemics aren’t a new thing,” said Edwin Bailey of Blackwell Auctions. “The world has always been tormented by viruses, and yellow fever was – and sadly continues to be – a nasty one. But John Kissinger’s amazing courage and self-sacrifice, coupled with Walter Reed’s persistence, helped to confirm mosquitoes as the disease’s primary vector.”

For additional information, contact Edwin Bailey at 727-546-0200. Bidding is available online through LiveAuctioneers, Invaluable, Bidsquare, Proxibid and HiBid, as well as absentee and by phone. 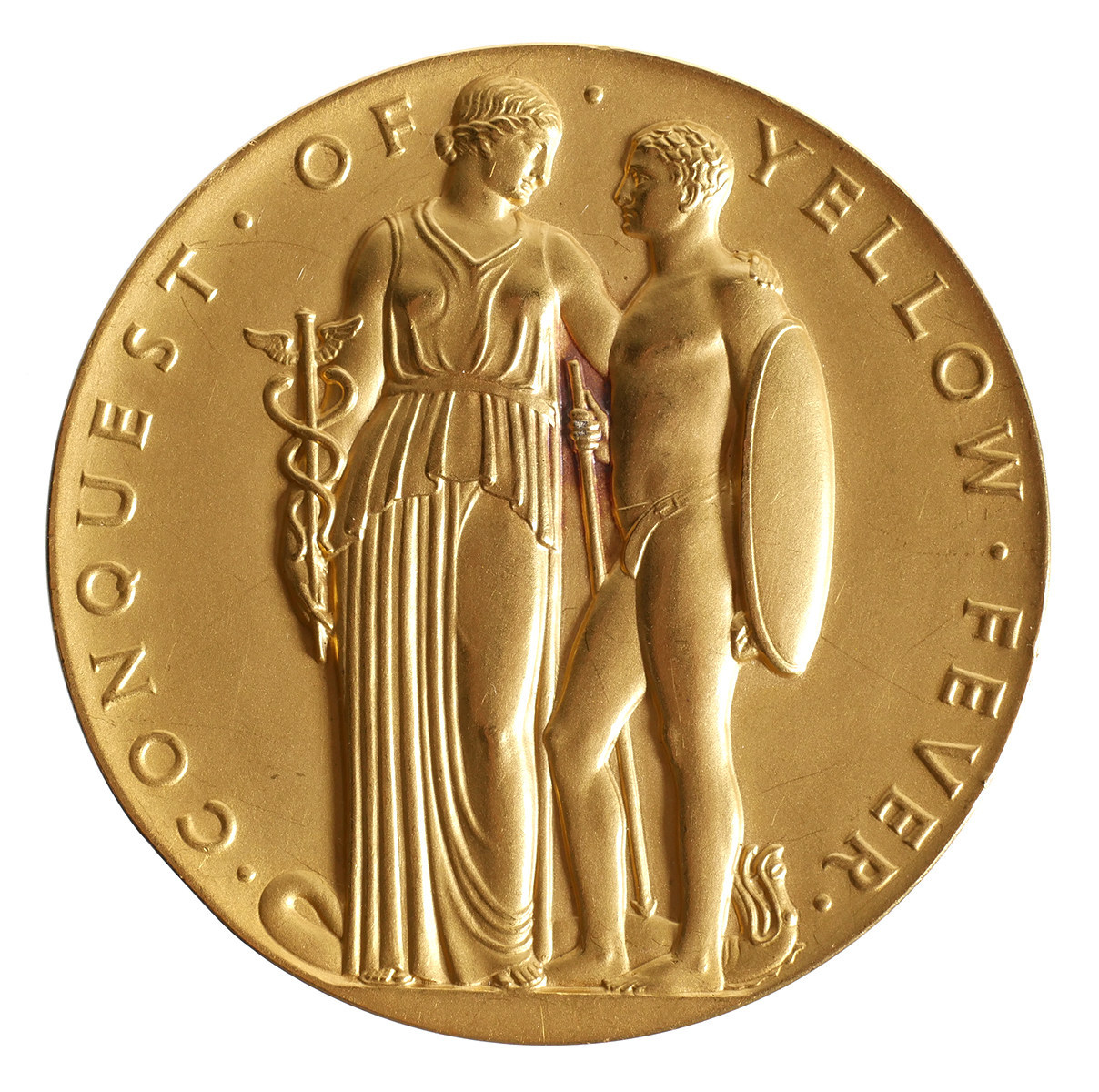 The Congressional Gold Medal, the highest civilian award given by the U.S. government. The Conquest of Yellow Fever award was given to each individual who participated in Dr. Walter Reed’s fight against the deadly disease. The medal was struck at the U.S. Mint and is 6.2 Troy ounces of .999 solid gold. 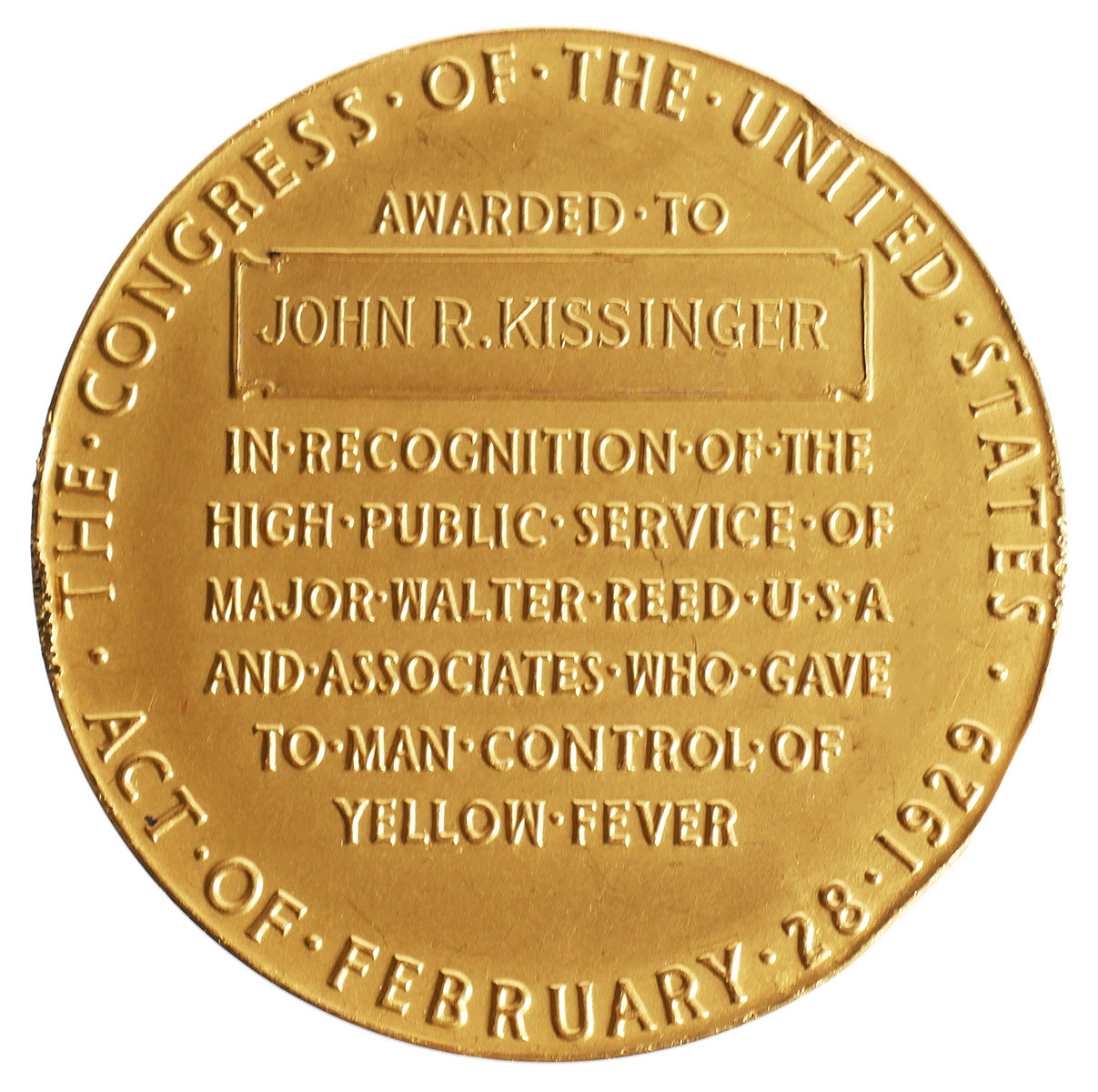 John Kissinger was a soldier from Indiana, stationed in Cuba under Dr. Walter Reed, and he was the first to volunteer to become infected by yellow fever. Dr. Reed said that “his exhibition of moral courage has never been surpassed in the annals of the Army.”
Shopping cart
There are no products in the cart!
0