So what makes something valuable? 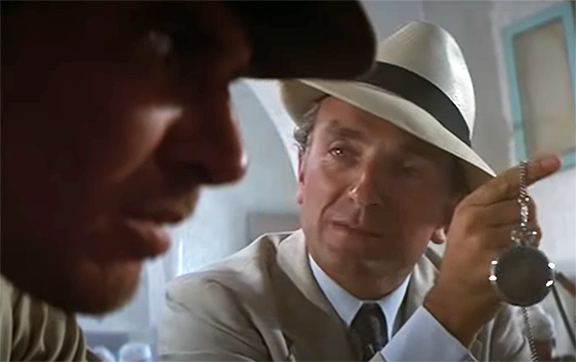 If you’ve been in the antiques business for any length of time, you’ve enjoyed similar conversations. Another familiar scenario involves a person’s insistence that the 40-year-old receipt showing that her mother paid $1,500 for a Hammond organ must mean “it’s worth at least that much now.”

There seems to be an almost universal expectation that age bestows value, with little awareness of the idea of supply and demand.

Age, for the most part, has little to do with value. Sometimes — most of the time, in fact — old is just old.

There’s a scene in Raiders of the Lost Ark in which Belloq, the villain, pulls out a pocket watch and shows it to Indiana Jones.

“Look at this,” he says. “It’s worthless. Ten dollars from a vendor in the street. But I take it, I bury it in the sand for a thousand years, and it becomes priceless …”

But that’s simply not true. It won’t be priceless. It’ll just be old. There are thousands of authentic, ancient Greek and Roman coins available online for the price of a sandwich. The same is true for most millennia-old arrowheads, for most million-year-old fossils.

This is a fact: Old things don’t have value simply because they’re old. (Well, except for people.)

Oddly enough, even rarity has little to do with value. Take a blank canvas and dump a quart of paint on it. It’s automatically a one-of-a-kind painting, as rare as it can be. And worth absolutely nothing, despite the fact that it’s made from the same materials as a Jackson Pollock.

Some years ago, I owned three woodblock prints by Japanese-American artist Chiura Obata, who was known for his exquisite landscapes. Two of the woodblocks depicted Yosemite scenes, and one was a portrait of an opera singer. I consigned them to a well-respected auction house (long before we opened Blackwell Auctions), who ran them consecutively, one after the other, just as they should have. The landscapes sold for $6,000 and $3,250. The portrait — a much rarer subject for Obata — sold for $300. But while it’s less likely to find a portrait done by Obata than a landscape, people who are familiar with Obata usually want one of his landscapes.

Rarity only matters if an item is in demand.

And here’s yet another challenge auctioneers and appraisers face: the tendency people have to assign additional (and irrational) value to an object simply because an old family member loved it. I call it the “sentiment premium,” and it’s sometimes hard to make some people understand its utter irrelevance to market value.

A fellow once called me about a religious print that had belonged to his great-grandfather, allegedly passed down from a couple of generations before that.

“He loved that piece,” the caller said wistfully, “and he’d sit and stare at it … for … hours.”

“Unfortunately,” I told him gently, “nobody’s going to pay more for it because your great-grandfather stared at it for hours.” Unless, of course, his great-grandfather was Jackson Pollock. But I left out that qualifier.

So what determines value?

There’s a lot to say about this. I’ll write more about it later.